Tri- KRILL™ Pump For Pets contains 500 pumps per bottle. Use one pump for every 10 pounds of body weight per day, thats a 250 Day supply for a 20 pound pet.

Tri- KRILL™ contains more astaxanthin per serving than any other plain krill oil product on the market.

Tri-KRILL™ is sourced directly from the Antarctic which combines the power of Krill Phospholipids with 20X astaxanthin per serving in an easy-to-use pump. We add genuine AstaREAL® astaxanthin to enhance the naturally occurring astaxanthin that krill oil contains twenty times stronger, the highest level in any krill pump.

BUY NOW
Directions:
Suggested use: Add 1 pump per 10lbs. of body weight to your pet’s food per day. You may double the dose for inflammation support. Consult your veterinarian if needed.

Side Effects:
Pets with allergies to seafood shouldn’t use krill oil. 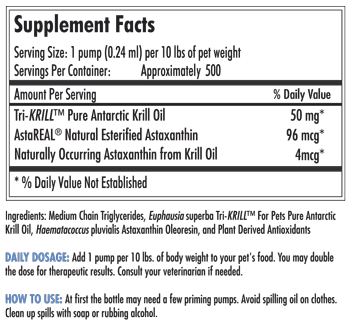 What Is Astaxanthin?
Tri-Krill™ contains high levels of one of the most powerful natural antioxidants called Astaxanthin. Astaxanthin is a carotenoid molecule from the same family as beta-carotene, lycopene, and zeaxanthin, though astaxanthin appears to be more active in quenching superoxide, hydroxyl, and other radical species. Recent studies suggest that astaxanthin has anti-inflammatory action, inhibiting cytokine cascades in a number of trials of cardiovascular health, respiratory health, joint health, athletic performance, and others.

Astaxanthins is what gives salmon its red color. Krill get their astaxanthin from small phytoplankton, their primary source of food. While krill contain natural levels of astaxanthin, we provide additional astaxanthin to our omega-3 krill phospholipid products.

These small crustaceans fuel the oceans of the world. Krill feed on phytoplankton, microscopic, single-celled plants that drift near the ocean’s surface and live off carbon dioxide and the sun’s rays. They feed hundreds of animals from fish, birds and whales. Antarctic krill are among the largest of the 85 known krill speciesand can live up to 10 years.

Krill oil contains omega-3 fatty acids, which is the main reason it’s a popular nutritional supplement.
Krill oil is contains an antioxidant called astaxanthin. The algae that krill eat produce the bright red pigment astaxanthin that gives krill and other crustaceans such as lobster and shrimp their reddish-pink color.

What is so special about Tri- KRILL ™?
Tri- KRILL ™ oil contains no less than 42% Phospholipids and 20 X the Astaxanthin, higher than any regular krill oil product on the market. Every batch is tested for contaminants and heavy metals. We feel we have set the highest standards for quality in our krill oil. It is also independently tested with 3rd party testing.

How is the Krill Oil harvested?
Each trawler is allowed to harvest during the main season and only about 1% of the allowable limit is actually harvested. Krill harvesting is among the most regulated of any harvesting or fishing methods in the oceans.

Is the krill population in the oceans sustainable?
Our krill is made from Euphausia superb (Antarctic Krill). This is one of the earth’s most abundant and sustainable organisms. Antarctic krill is the largest biomass on earth. The total quantity is estimated to be between 500 and 800 million tons. The weight of this biomass is almost double that of all the humans on earth.

The krill harvest is well below conservative international catch guidelines. Most of the harvested krill is used for fish feed in salmon farms and the quantities harvested are less than 1% of the 1% harvested annually.

What Is Astaxanthin?
Krill oil contains high levels of one of the most powerful natural antioxidants called Astaxanthin. Astaxanthin is a carotenoid molecule from the same family as beta-carotene, lycopene, and zeaxanthin, though astaxanthin appears to be more active in quenching superoxide, hydroxyl, and  other radical species.

Astaxanthins are what gives salmon its red color. Krill get their astaxanthin from small phytoplankton, their primary source of food.

While krill contain natural levels of astaxanthin, we enrich our Tri- KRILL ™ with additional astaxanthin to 7 times the regular level. This is in recognition of the tremendous antioxidant value astaxanthin adds to both product stability and clinical outcomes.

Why is it so important to supplement my pet’s diet with Omega 3 fatty acids?
Today, our pets are receiving more Omega 6 fatty acids in their diets than necessary. The cattle meat used in most pet foods contains an unnecessary amount of Omega 6 fatty acids because the cattle are now being fed grains instead of grass. Too many Omega 6 fatty acids can cause arthritis, allergies, skin disorders and obesity in our pets. Supplementing our pets’ diets with Omega 3 fatty acids will help to normalize this imbalance. Krill Oil absorbs quickly into the system, providing benefits such as agility, decreased inflammation, and can help maintain a healthy heart, brain and nervous system. Ask your veterinarian about how Krill Oil can benefit your pet!

Isn’t fish oil a good source of Omega 3 fatty acids too?
Yes. However, Krill oil contains a higher concentration of Omega 3 fatty acids, and also contains Astaxanthin, which is an added nutritional benefit. It does not contain mercury and therefore there is no added risk of heavy metal poisoning. In addition, Krill Oil contains highly bioavailable EPA and DHA which can aid in cognitive function, and help fight mood swings and inflammation. Krill Oil is FOUR times more potent than Fish Oil and therefore has four times the benefit!