Another active-herb (seed oil of mujingyou, Vitex negundo var.heterophylla) – controlled clinical study found that after receiving Cs-4 treatment for 1 month, patients with respiratory diseases felt physically stronger; some of them were able to jog for 20 meters (Institute of Materia Medica, Beijing, China, unpublished report). The Cs-4 treatment appeared to be highly efficacious with a total effective rate of 82.9%, as compared with 40.2% for the active control group (p < 0.01).

A study on the long-term use of Cs-4 in combination with standard therapy in patients with chronic heart failure was the subject of a study in China in patients on digoxin, hydrochlorothiazide, isosorbide dinitrate, furosemide, lanatoside, dopamine, and dobutamine (Chen, 1995). Long term administration of Cs-4 as an adjuvant treatment in patients with congestive heart failure gave rise to significantly greater improvements in quality of life than reportedby disease- and age-matched control patients who received only standard drug treatments for congestive heart failure. Quality of life parameters included improvements of general physical condition, mental health, sexual drive, and cardiac function (Table 5).

The enhancement of physical performance and amelioration of quality of life in response to Cs-4 treatment may be attributed to the improvement of energy states with greater efficiency of oxygen utilization described earlier, as well as to the function improvement in oxygen scavenging and in pulmonary, cardiovascular, and other systems, as detailed below, or in part II of this review.

TABLE 5. IMPROVEMENT OF QUALITY OF LIFE OF PATIENTS WITH CHRONIC HEART FAILURE IN RESPONSE TO LONG-TERM CS.-4 ADJUVANT TREATMENT 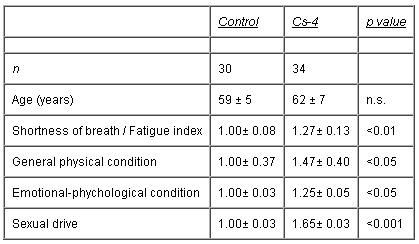 Patients with chronic heart failure were treated with Cs-4 (3-4 g/day) for 26 ± 3 months, in addition to standard drug treatments for congestive heart failure. Data are adapted from Chen (1995) and are expressed as fractions of mean values observed for controls who received only standard therapies without Cs4 adjuvant treatment. Shortness of breath/fatigue index was assessed according to Yale grading system; general physical condition according to Feistein method; emotional-psychological condition according to Croog method; and sexuality of patients was based on a modified Kong questionnaire. note: n.s., not significant compared with pretreatment values.

The use of natural Cordyceps to ameliorate conditions associated with aging and senescence is centuries old. Yet scientific research of its potential in geriatrics has only recently been initiated. There is evidence to show that during aging in humans and animals, a considerable accumulation of an excess of oxygen-free radicals occurs, which results in oxidative damage to cells and their intracellular organelles, including age- and illness-associated damage to the energy-producing mitochondria. As one mechanism, an aging- or disease-related dramatic reduction in the oxygen free radical-scavenging activity of superoxide dismutase (SOD) is believed to be responsible for excessive cellular oxidative damage. The antisenescence effects of Cordyceps in relation to an ability to activate SOD and scavenge oxygen free radicals were studied in humans and animals.

In placebo-controlled clinical trials (Cao and Wen, 1993; Zhang et al., 1995), Cs-4 was administered orally to elderly patients with asthenia. In association with the majority showing subjective improvement (as shown in Table 4), there was a concomitant significant increase in red blood cell (RBC) SOD activity in the Cs-4-treated patients (Table 6), which was significantly better than that of the placebo group. Associated with the increases of SOD, concentrations of plasma malondialdehyde (MDA, a measure of lipoperoxide, an oxygen free-radical species) were significantly decreased in Cs-4-treated elderly patients, whereas there was no significant change in the control group. As also demonstrated in this study (Table 6), even with age-associated low pretreatment SOD activity and high MDA concentrations in the elderly patients, treatment with Cs-4 increased SOD activity to levels significantly higher than in young adult controls and reduced plasma MDA content to levels comparable to those of the young adults (Zhang et al., 1995).

TABLE 6. INCREASES IN SOD ACTIVITY AND DECREASE IN PLASMA MDA (A MEASURE OF LIPOPEROXIDE) IN ELDERLY PEOPLE AFTER CS-4 TREATMENT

An increase in SOD activity has been associated with a remarkable clinical improvement in elderly patients in two open-label clinical trials. In the first, after being treated with Cs-4, elderly patients with chronic obstructive pulmonary disease (COPD) showed a marked improvement in cough, phlegm, appetite, vitality, and pulmonary, symptoms (Wang, 1995).Compared with pretreatment baselines, concomitantly, there was a significant increase in SOD activity (Table 7). In the other trial, patients with chronic renal dysfunction were treated with Cs-4 for 1 month (Jiang and Gao, 1995). After treatment, there was a significant increase in total SOD activity (Table 7) compared to pre- treatment levels. In addition, lipoperoxide (LPO) concentrations were significantly de- creased. These findings suggested that Cs-4 enhanced the body’s ability to scavenge oxygen-free radicals in different disease conditions.

Natural Cordyceps and mycelial fermentation products of Cordyceps have both shown significant antioxidation effects. For instance, a significant increase in SOD activity and decrease in LPO concentration were found in liver homogenates after treatment of mice with either natural Cordyceps or fermentation Cn80- 2 (Paecilomyces sinensis) product (1.3 g/mL) for 14 days, as compared with placebo controls (p < 0.05-0.01) (Liu et al., 1991).

In addition to the free radical hypothesis, another concern in relation to the aging process is catalytic increases in monoamine oxidase-B (MAO-B), which particularly occurs after age 45 (Sparks et al., 1991). This enzyme resides on the membrane of mitochondria. Increases in the catalytic function of MAO-B that occur with aging and in some aging-related mental diseases result in an altered metabolism of dopamine and other monoamine neurotransmitters. Researchers suspect that inhibition of MAO-B activity by Cordyceps may benefit the elderly by increasing brain concentrations of numerous amines. When tested in brain homogenates of mice or rats in vitro, MAO-B activity was significantly inhibited (She, 1991). These results were found after treating brain homogenates of rats or mice with extract of Cs-4 or other mycelial fermentation products at a ratio of 1:1 0 (Table 8).

Patients with either COPD (56 to 79 years of age) or renal dysfunction were treated with Cs-4 : COPD patients:
3 g day for 3 weeks; renal dysfunction patients : 5g/day for 4 weeks. Results are expressed as fractions of mean
pretreatment values. Data are adapted from Wang (1995) and Jiang and Gao (1995)

TABLE 8. IN VITRO CATYLITIC INHIBITION OF MONOAMINE OXIDASE B (MAO-B) IN BRAIN HOMOGINATES AFTER INCUBATION WITH CORDYCEPS PREPERATIONS

MOA-B catalytic activity was measured with brain homogenates prepared from rats and mice, and incubated with either a placebo or an extract of Cordyceps Mycelial fermentation product in 37 deg. C for 20 minutes. MF-Cs1 and MF-Cs2 were different Cordyceps Mycelial fermentation products from Tatong Liqun Pharmaceuticals, Shanxi, China and Hangzhou Second Pharmaceuticals, Zhejang, China (mycelial strain not stated). Data are adapted from She (1991) and are expressed as fractions of mean values for controls.