In the practice of TCM, Cordyceps has long been used to treat male impotence and other types of sexual dysfunction. Recently, the libidinal effects of Cordyceps were examined in the clinic and in animal studies. Animal studies demonstrated that Cs-4 induces sex steroid like effects (Wan et al., 1988). In mice coadministered hydrocortisone (step-incrementa from 30 to 50 mg/kg, i.m.) and Cs-4 (3 g/kg, p.o.) for 15 days, the loss of body weight and atrophy of adrenals and thymus found in un- treated controls was not sustained. In castrated mice, an increase in the weight of the seminal vesicles and preputial glands was measured after Cs-4 treatment (3 g/kg). In the same study, the weight of the preputial glands and testes was increased more than 90% in normal pre- mature male mice (both p < 0.01), while in pre- mature female mice, a 6-day Cs-4 treatment (3 g/kg, i.g.) caused an increase in the weight of uterine (+43%) and adrenal tissues (+18%) (p < 0.01 and <0.001). The male hormone-like effects of natural Cordyceps were also tested in mice that had undergone bilateral orchidectomy. After treatment with natural Cordyceps (5 g/kg, p.o.) for 7 days, seminal vesicle weight in mice was significantly greater (+41%) than that of age and weight-matched controls (p < 0.02) (Wang and Zhao, 1987).

After a 3-month treatment with Cs-B414 (10 g/kg, p.o.) (a mycelial extract of Cordyceps, strain not stated), the average weight of rabbit testes (relative to body weight, n — 8) was significantly 30% greater than that of controls (p < 0.02) (Huang et al., 1987). Further analysis of sperm counts showed an average number higher (threefold) than that of controls.

The effects of natural Cordyceps on the hypothalamo-pituitary-adrenocortical axis was also examined in a mouse model, which was generated by pretreatment with hydrocortisone (HC; 0.5 mg/day, days 1-10) by intramuscular injection (Huang et al., 1987). The HC pretreatment induced a 58.8% decrease (p < 0.001) in the weight of the adrenal glands (7.7 ± 2.1/100 g body weight [BWJ), as compared with the untreated controls (18.7 z 3.2/100 g BW). In one of the experimental groups, mice were injected with natural Cordyceps (2.5 g/kg, J.p., days 2-9) in parallel with the HC treatment. The weight of the adrenal glands was significantly greater (+42%) than those of the HC model group that received placebo (p < 0.001). This suggested that Cordyceps had apparently attenuated the effects of HC in adrenal atrophy. These effects on the hypothalamo- pituitary-adrenocortical axis occurred concomitantly with attenuated spleen atrophy and an increased capability of mice to adapt to a cold environment.

In humans, Cs-4 was used in a placebo-controlled clinical trial involving elderly patients reporting decreased libido and other sexually related symptoms (Yang et al., 1995). Cs-4 therapy was associated with a subjective improvement of up to more than double the number of those in the placebo-treated control group (Table 9). This study demonstrated that Cs-4 could benefit both men and women, as detailed in Table 10.

In another double-blind, placebo-controlled clinical trial (Yang et al., 1995), patients who reported decreased sex drive were treated with Cs-4. The total subjected improvement rate in the Cs-4 group was significantly higher than that observed in the placebo control group (Table 9). Moreover, an increase in 24-hour urine 17-keto-steroid in the Cs-4-treated patients was also revealed in this study, while patients in the control group had a much smaller increase (Table 11 ). These results indicated that Cs-4 might affect patients’ sexual drive and functions, either via sex hormone systems or by directly acting on the sexual center of the brain and sexual organs, in parallel with effects on the hypothalamo-pituitary-adrenocortical axis.

Another clinical trial involved 189 patients who reported decreased sex drive (Wan et al., 1988). After Cs-4 treatment, over half of the subjects in the Cs-4 group reported improvement, which was significantly greater than that reported by the placebo control group (Table 9). Also reported in this study, Cs-4 treatment of 28 impotent male patients (not included in Table 9) led to an improvement in 64.3% of patients (p < 0.001).

In a separate open-label trial involving 22 male patients with impotence, after Cs-4 treatment more than one-third were capable of sexual intercourse and more than half experienced clinical improvement to some extent (Table 12) (Guo, 1986). After Cs-4 treatment in another trial, the average sperm count greatly increased (+33% on average) from pretreatment levels, which was consistent with that found in normal rabbits (Huang et al., 1987). In addition, the average incidence of malformed spermatozoa was reduced and the survival rate of spermatozoa increased. It was suggested that the beneficial effects of Cs-4 might be due in part to the fact that it is rich in amino acids, vitamins, and trace elements such as zinc, which are essential for sperm survival (Guo, 1986).

In double blind studies, patients with hyposexuality were treated with either a placebo or Cs-4 (3 grams/day) for 40 days. 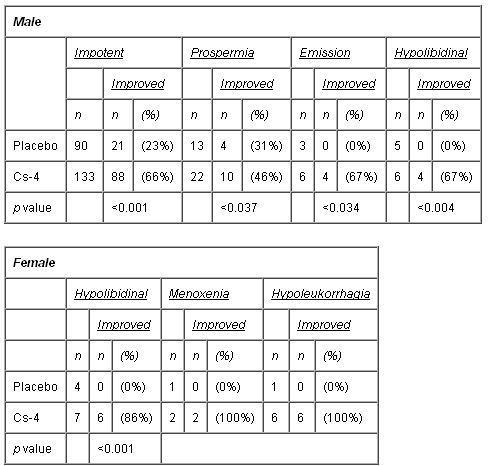 Patients with hyposexuality were treated with either a placebo or Cs-4 (3 g/day) for 40 days in a double blind study.

Data are adapted from an unpublished report by the Institute of Materia Medica, Bejing, China.

In a double blind study, patients with hyposexuality were treated either with placebo or Cs-4 (3 grams/day) for 40 days. Data are adapted from Yang et al. (1995) and are expressed as fractions of mean pretreatment values for placebo control patients.

Clinicians in China have recommended Cs- 4 for the treatment of refractory hyperlipidemia (Zhang ZJ, Jiangxi Medical College The Second Affiliated Hospital, unpublished report). Studies have suggested that natural Cordyceps and its mycelial fermentation products can regulate the metabolism of blood lipids, control hyperlipidemia, and act against the formation of atherosclerosis.

Under experimental conditions of stress in rats, intragastric perfusion of Cs-4 produced significant decreases in TC, TG, and LDL-c (middle panel, Table 13) and an increase in the ratio of HDL-c:TC (Xu and Zhang, 1985). In rats fed a fat-rich diet, Cs-4 reduced serum TC, TG, LDL-c, and vLDL-c (lower panel, Table 13). In addition, Cs-4 treatment was associated with an increase in HDL-c and an increased ratio of HDL-c:TC, when compared with controls. In addition to reducing serum TC and (BETA) lipoprotein, Cs-4 and its concentrated product, CsB- 851, can also interrupt the formation of athero- matous plaque in the aorta and inhibit thrombosis on the surface of experimentally injured endothelia of arteries (Bao, 1995; Yue et al., 1995).

The mechanism of cholesterol-lowering effects of Cs-4 has also been studied. When the concentrated product of Cs-4, CsB-851 (200 mg/kg, s.c.) was tested in mice, 14C incorporation into newly synthesized cholesterol was significantly reduced by about half (Li et al., 1992). This indicated an in vivo inhibition of endogenous cholesterol biosynthesis. It was further demonstrated in this study that CsB- 851 (800 mg/kg per day, for 3 days) did not change fecal discharge of 3H-neutral cholesterol given by mouth, suggesting that there were no changes in the absorbtion and excretion of cholesterol via the gastrointestinal tract.

To elucidate the mechanisim of the TG-lowering effects of Cs-4, investigators pretreated rats intragastrically with Cs-4 and found a 27% decrease of plasma triglycerides and a 8.7% increase of plasma free fatty acids (Table 14) (Xu and Zhang, 1985). After activation of lipoprotein lipase (LPL) by heparinization (heparin injection), the difference in triglycerides between the experimental and placebo control groups was eliminated. Because LPL residing on the endothelia of the blood vessels can be released by heparin and catalyzes hydrolysis of triglycerides to yield glycerol and free fatty acids, these findings suggest that the triglyceride-reducing effect found in the Cs-4 group prior to the heparinization could be due, at least in part, to a Cs-4-mediated activation of LPL.

A 45-kd polysaccharide, CS-F30 was purified from a fermentation product of Cordyceps and tested in animals (Kiho et al., 1996) This Polysaccharide is composed of galactose, glucose, and mannose at a molar ratio of 62:28:10. In addition to dramatic reductions of blood glucose, serum TG was significantly reduced in normal mice at 3 (- 26%) and 6 hours -.28%) after administration of CS-F30 (50 mg/kg, i.p.), as compared with controls (p < ).01). Three hours after the polysaccharide treatment, TC was lowered by 16% in normal nice, and 23% in streptozocin (STZ)-induced diabetic mice, as compared to baseline (both < 0.01). These results suggest that in conunction with other natural bioactive components in Cordyceps, the 45-kd polysaccharide may play an important role in reducing blood lipids and glucose. 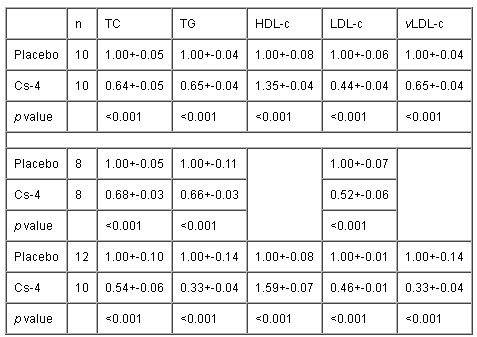 Normal rats (upper panel) or rats under experimental stress conditions (middle panel) were treated either with a placebo or Cs-4 (5 grams/day) for 7 days, or rats were fed a fat-rich diet (4% cholesterol, 1% cholic acid, 10% lard) for 30 days (lower panel) in combination with either placebo or Cs-4 (5 grams/day); they were also given noradrenalin (20 mg/day) daily, 6-7 hours after placebo or Cs-4 treatment. Data are adapted from Xu and Zhang (1984) and are expressed as fractions of mean pretreatment values for placebo controls in each experiment.

Clinical use of natural Cordyceps and its fermentation products in the treatment of hyperlipidemia.

In a randomized clinical trial, patients were treated with Cs-4 while a control group received an herb, yuejiancao jouwan (an Oenolhera preparation) (Quin et al., 1995). In the Cs-4 treatment group, serum TC and TG were significantly decreased from baseline, and HDL-c was significantly increased (Table 15).

In a clinical study with 20 patients suffering from coronary heart disease, there was a significant reduction of both TC and TG after Cs- 4 treatment, and (BETA)lipoprotein was significantly decreased (Table 15) (Che and Lin, 1996). The viscosity of plasma and of whole blood was significantly decreased (both p < 0.01). Both associated electrocardiographic improvement and subjective clinical improvement were evident.

Overall, the Cs-4 treatment was associated with a significant reduction of cholesterol and triglycerides and an increase in HDL-c. However, the variations in the magnitude of the response to Cordyceps demonstrated in these trials may be related to different pretreatment baselines of cholesterol and triglycerides for the trial subject populations. Added to the effects of Cs-4 in reducing oxidative stress resulting in lipid oxidation by increasing the scavenging of oxygen free radicals (lipoperoxide) as shown in Tables 6 and 7 (Cao and Wen, 1993; Jiang and Gao, 1995; Liu et al., 1991; Wang, 1995; Zhang et al., 1995), and its ability to reduce blood viscosity in clinical studies (Che and Lin, 1996), the changes observed in blood lipids indicate that Cs-4 may well produce beneficial effects in the treatment and prevention of atherosclerosis and subsequent cardiovascular and cerebrovascular diseases with few side effects. 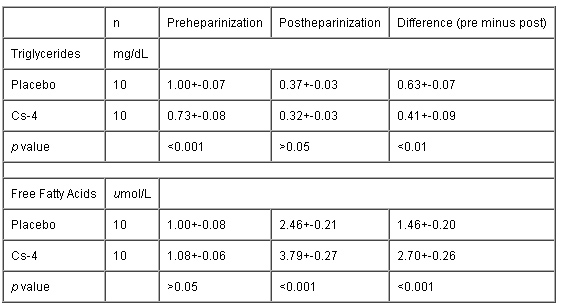 Normal rats were treated p.o. with either placebo or Cs-4 (5 grams/day) for 7 days.they were anesthetized and catheterized arterially. Blood samples were collected 2 minutes before and after heparin injection (0.4 mg/kg) and analyzed for plasma triglycerides and free fatty acid concentrations. Data are adapted from Xu and Zhang (1984) and are expressed as fractions of mean preheparinization values for placebo controls.

Patients with Hyperlipidimia were treated with Cs-4 (dose and length of treatment as indicated). data are adapted from the references indicated and are expressed as percentage change from pretreatment values. Note:”-” means decrease; “+” means increase.