If you are like most dog lovers, you take great pride and joy in the happiness and healthiness of your four legged friend. EverPup, the ultimate daily dog supplement, was designed after years of research in response to the number one question we get: How do I keep my healthy dog healthy?

Designed by Dr. Demian Dressler, inventor of Apocaps, the world’s first apoptogen formula, EverPup has some of the same natural apoptogen ingredients as Apocaps, but also includes glucosamine (for joint support), Prebiotics and Probiotics (for digestive support), plus essential vitamins and minerals.

EverPup contains exciting human grade, nutraceutical-quality botanicals such as Silymarin from milk thistle, Gingerols from ginger root, Luteolin from peanuts, Rutin from the Chinese Scholar tree, Inulin from chicory, Spirulina Pacifica from crystal-blue Hawaiian waters, and more. All of these well-researched and evidence-based ingredients are combined into a delicious, proprietary formula that makes EverPup the ultimate daily dog supplement.

One jar lasts 30 days for the average sized dog, making EverPup a great value since it is designed to be a “one stop shop” for all of your dog’s supplement needs.

It’s Delicious! We haven’t met a dog who doesn’t love the taste of EverPup. It is easy to administer the sprinkle-on powder using the included scoop. For less than a dollar-a-day, you can invest in your dog’s health and happiness…and that will pay dividends for years to come.

People are becoming increasingly aware of a number of “invisible enemies” associated with modern living that may threaten dogs (and people) as they age. The amazing ingredients in EverPup are designed to help your dog’s natural system combat those invisible enemies.

EverPup is made in the USA from 100% human grade natural ingredients in an FDA inspected facility.

100% Guarantee: If you don’t love EverPup, manufacturer will buy it back.

EverPup’s unique formula is crafted based on research conducted in labs around the world. Each ingredient is carefully chosen based on the available evidence that it can help protect cells and organs from the invisible enemies that affect most body systems. The ingredients are carefully balanced with a wide range of vitamins and minerals to create a brand-new type of supplement based on synergy.

In other words, the whole of EverPup is more than the sum of its parts, because each ingredient works with each other ingredient to support and overlap benefits. The addition of our proprietary technology Biovadex, which makes EverPup easily absorbed, boosts the potency of this protective, supportive formula.

EverPup contains vitamins and minerals that may be familiar to you, but they are not always included for familiar reasons. Sometimes, they are included to offer special support for the key ingredients. This synergy is what makes EverPup the very special formula that it is today. 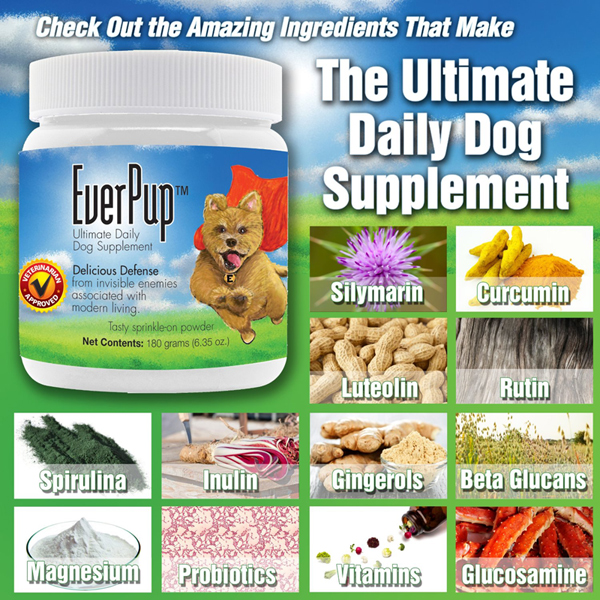 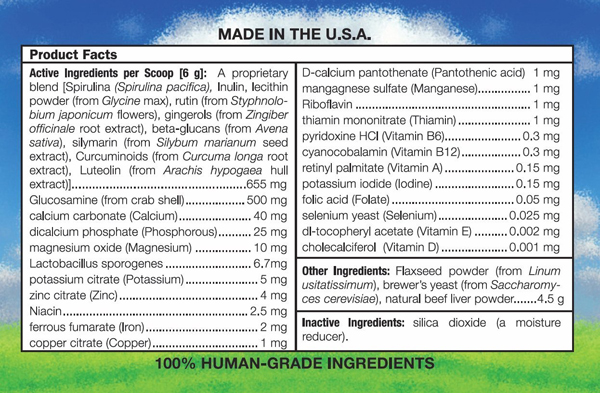 EverPup for dogs is guaranteed

We are so confident that you and your dog will love EverPup that we stand behind it with our 30-day, Bottom-of-the-Jar Guarantee.

Try EverPup for a month risk free. If you and your dog aren’t totally satisfied, send the jar to Functional Nutriments (even if it is empty) and we will buy it back for the price you paid (less shipping & handling). Copy of original receipt necessary; limit one refund per person/household. 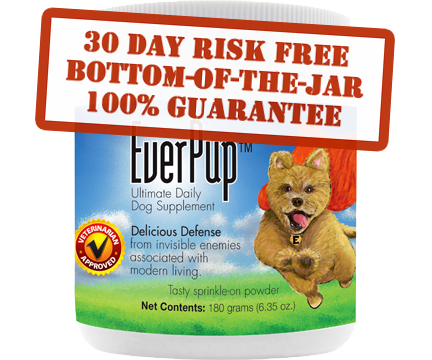